Guest Blog: A House of Healing Within the Walls of San Quentin

Editor’s Note: From time to time, Lionheart welcomes guest bloggers to write about topics aligned with our mission. If you would like to be considered for an upcoming guest blog, please contact us at: questions@lionheart.org.

Many thanks to Susan Shannon and the original Houses of Healing group for contributing the following article and sharing their experiences. Please check out “Stories from Lifers” at the bottom of the page.

Working in San Quentin State Prison has opened me up to so much wonder, often inspired by the pain and suffering I witness daily, the outgrowth of very difficult, often inhumane and unconscionable childhoods.  Have you ever pondered the bamboo shoot that has grown undergrounds for tens of feet before it finds that one crack in the sidewalk, or that one area of soft ground, then spires to the sky? Welcome to the fruit I have witnessed from the Houses of Healing program.

I was blessed to take a Prison Ministry class in the final year of my Masters in Divinity program. This class was taught by Father George Williams, a Jesuit Priest, who is also the Catholic Chaplain at San Quentin. I initially took this class because it was offered on the one day I was on campus, but it quickly became much more than that. This class was the first trail of breadcrumbs leading me to a life-changing journey.

An astrologer told me 35 years ago that I would find my right-livelihood in “institutions.” I figured that the 20 years of work I had done with a few monasteries in India and Nepal had fulfilled that. I also had acquired a number of skills and tools in my toolbox having to do with Emotional Literacy and Restorative Justice. I had worked with middle school kids and adults in both fields for some time. As well, 40 years of Buddhist practice had hammered me into a good working vessel of compassion, insight, listening skills and a non-judgmental approach to life. I was blind to the fact that entering San Quentin would mark all that had come before as floorboards in my own growth and ability to embrace humanity in all its forms; floorboards which were lifted and transformed, one by one.

After the first year of attending Restorative Justice meetings with the inmates, I was ready for more. I asked Father George Williams if he would allow me to expand my hours at the prison and supervise me through the next leg of my chaplaincy program, a 2000-hour internship. To my delight, he agreed, and suggested that I start a Houses of Healing group there. He had taught the Houses of Healing curriculum on the east coast, knew Robin Casarjian, author of Houses of Healing and Executive Director of The Lionheart Foundation, was confident in my grasp of Emotional Literacy and my spiritual dedication– plus he had 12 Houses of Healing books ready to go!

I had already gotten involved in three other groups at San Quentin, two, which were yearlong, groups dealing with in-depth soul searching and self-disclosure. Each group went deeply into the core teachings of Houses of Healing, but were differently focused-one on understanding victim awareness and one on domestic violence prevention. I had developed a sense of what “being ready” looked like among these inmates, as well as a sense of what “almost ready but not quite” looked like. Over the nearly 9 months of groups I had also seen how ripeness for the journey to one’s core self, one’s heart space, has its own timing.

I decided to offer my Houses of Healing group to men who were not quite ready for the yearlong programs. I had hoped for at least some who had never done programs, but were at a crossroads in their life and were ready to test the waters. Father Williams had taught this whole course in 8-12 weeks. It seemed a perfect “training wheels” program. I asked the men in my existing groups to spread the word of this new Houses of Healing group to men who fit that description. I quickly had a list of twelve men. Father Williams granted me the boon of one highly skilled and seasoned inmate as a co-facilitator, later adding on another seminary student. We had a room assignment of the small but cozy library in the Catholic Chapel.

Our Houses of Healing group began in September of 2012. To my delight I had a great mix of a few men who had never done any programs, but had “been down” for years, along with a few men who were veterans of several programs. We had a good age spread as well. I left our first meeting absolutely thrilled at the mix.

Little did I know that I was embarking on what has become one of the most powerful of tribal councils, peace summits, monastic meetings, sangha of truth, teaching circle and family of soul that I have ever known. Keep in mind that I have a history of doing lots and lots of groups, so I don’t say that lightly. Now and then with group work, the people in attendance almost seem to be calculated by some Divine Chef, as each adds such an exotically special flavor that the whole broth becomes an otherworldly elixir. This was so with my first Houses of Healing group.

It soon became clear to me that nearly everything I have ever learned about group facilitation had to be thrown out the window. As “each one teach one” became the theme of the class, I learned quickly to De-Facilitate. Simply to sit in the presence of these brave souls as they bore witness and taught each other through their own examples of storytelling prompted by the altruistically based curriculum of Houses of Healing. Night after night I came home and waded in wonder as I integrated the equal power of the truths of doing as well as not-doing. I witnessed the power of Wu-Wei, as the Taoists say, the path of “not doing” that can lead all present to their true nature.

As weeks led into months, I realized this was not going to be any 8-12 week group. We continued on as long as we got traction out of the teachings of the book. Discussions ripened into tears long held and easily released into our trusting tribe. Stories emerged as buried treasure chests which had been masquerading as a ball and chain around the ankle of a person who formerly viewed themselves as condemned, but now sprouted wings and saw themselves as liberated.

Robin responded thoughtfully, carefully and immediately to any questions I had. Father Williams was content that our “container” was strong and consistent enough to prevent any of these guys from ending up in The Hole or Ad-Seg due to lack of integration. My co-facilitator and I had agreed that we would end when we felt we were darn ready to end. That said, he was positioned to be released as one of the first of the Three Strikers to get out after Prop. 36 passed. Plus, our waiting list was growing.

Four months in I asked the guys for their first and only real assignment, though they had been given “pause and reflect” handouts all along. After hearing so many comments about how “this book” had turned their thinking and their lives around, I decided one day to make a request. “Please, guys, pick something, anything from the HoH book that moved you. Give us a 2-4 minute presentation about that topic in any form you want: writing, song, drumming, mime, art, whatever.”

Week by week went by of presentations, each one absolutely mind-blowing in the articulation of the transformation and integration hat had occurred in time together! I suggested to the guys that we make a booklet of these amazing testimonies and send as a thank-you to Robin, and as a testimony to the incredible living and healing document that Houses of Healing provides; a guidebook to the soul.

As the stories unfolded, so did the ideas for this booklet. I had the men visualize images they wanted to include. Later I went home and found matching images online. We shared the tragedy of our second co-facilitator’s sudden death. We shared the mixed emotion of joy and loss when my inmate co-facilitator was released, and later, another member. Finally, our booklet was completed and shared with Robin-and now all of you.

The men hope that their “Stories from Lifers” (Click Here to View Stories) will be inspiring to others. They have given me full permission to share this booklet with all of you. They also hope that somehow this booklet will grow, including other stories, maybe even one day helping to fund the purchase of HoH books for ongoing classes. All of the men from this group are now mentoring our second HoH group. Each One Teach One.

I hope you all enjoy these profound stories and can utilize your inspiration for the work you are all doing in other prisons around the United States and around the world utilizing the Houses of Healing curriculum.

May all beings benefit by our efforts!

Much Respect and Many Thanks,

Susan Shannon, M. Div., and the Original Group of Houses of Healing in San Quentin, CA. 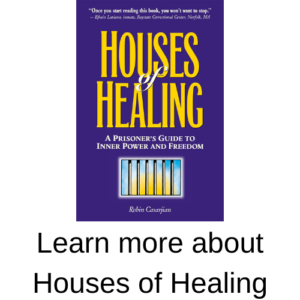 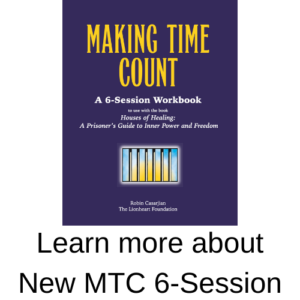